Cool Milk operates in a service where we have built our reputation around a complete service promise. Quality is at the very heart of all our processes and when you place an order with us you can be guaranteed that what we deliver to you matches your expectations. The key to making all this happen lies with our people and their achievement in ISO 9001 reflects the commitment of everyone in our business to quality and delivery assurance. Cool Milk continuously reviews the quality of our services and the level of customer satisfaction with regular service assessments. Results are utilised in the development of the selection of services and duly reported on the website.

Our Finance team have worked hard over the last year to ensure that the quality of the SPS invoices sent out are as accurate as possible with a performance quality target achieved from Sep 14 to Sep 15 of 99.4% (an increase of 0.3%).

Continued in house training and qualifications worked for during 2014/5 allowed the development of the team to continue and improve over the year.

The last year’s performance statistics show that overall all areas of the customer journey that are targeted achieved the high targets set.

Where the standards fell below targets the details are as below:

1) Jan 15 – the new government legislation took effect on January 1st and although Cool Milk worked with thousands of schools to prepare them for the changes that were going to happen, the influx of questions and children registrations far exceeded expectations which meant that we were unable to answer all the emails in the performance standards set. A recruitment process was immediately undertaken to alleviate this problem and by February the team were back to exceeding targets.

2) Jan + Mar 15 –the legislation changes required some significant differences to the way that both our customers and Cool Milk needed to operate. The volumes were significantly higher than in other months with very complex queries involving SPS, Pupil Premium and UIFSM. Some of the new colleagues taken on were not up to speed quickly enough to deal with some of our customer queries resulting in negative feedback above our standard levels. Through consistent ongoing training and the introduction of the Cool Milk Relationship Team we were able to improve our performance from April onwards.

3) Dec 14 – we saw an increase in settings cancelling within the first month and this was down to the legislation changes where settings decided to either switch to serving milk during the school lunch period or move to self-claiming.

Targets increased in all other areas especially with child registrations, new setting cancellations and call answering

Cool Milks and its dairy partners’ commitment to delivery performance and resolution of issues are as high as ever and we continuously monitor and review every dairy against their deliveries both daily and monthly.

Cool Milk has promised, in conjunction with its partners to reduce resolution of issues as quickly as possible and these figures evidently show the work that has been put in to improve the number resolved by over 2% since May 2014 with our target expectation increasing from 92% to 95%. 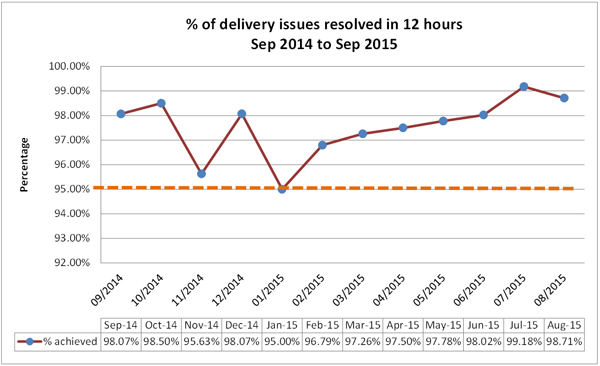 See full details of all our performance and quality results

Cool Milk attained ISO accreditation in January 2012 and we continue to perform within industry standards which ensured that we attained it again in 2015 for the 4th year running. Quality management is an integral part of our business and we continue to improve on our standards by regularly reviewing our objectives and targets.

Cool Milk recognises the importance of environmental sustainability and we are committed to operating our business responsibly. In January 2012 we obtained ISO Environmental accreditation; formal recognition that we’re trying to continually improve our environmental performance and due to our commitment to this area have retained this ISO in 2015.

Cool Milk attained Investors in People – Gold Accreditation in May 2015 with the firm belief that we needed to reinforce our market position based on quality. As a recognised quality mark Cool Milk wanted to demonstrate to our customers that our commitment to our employee engagement and development was at the forefront of our ethos.